Alcoholism … Perhaps, no word is associated with so many various problems as with this. And rarely around what disease there are so many myths, stereotypes, rumors, how many around the addiction to alcohol.

What is the biggest misconception about alcoholism?

Most likely, the attitude towards him as a kind of social licentiousness and permissiveness. A large mass of the population imagines alcoholism simply as licentious behavior and a gradual slide down the social ladder. Alcoholism is a real disease characterized by a change in metabolism in the body, due to which a person cannot stop himself even after the first drink.

What’s going on? Why is alcohol becoming a vital human need?

Addiction develops gradually. At first, a person just gets pleasure from drinking alcohol; then, a stable association is formed in the brain: alcohol = pleasure. This is how psychological dependence is formed. If you do not stop in time, the disease progresses. Ethanol (ethyl alcohol) burns easily, not only in the air. In the human body, energy is extracted from proteins, fats, and carbohydrates; alcohol is not only easily incorporated into the metabolism but also, being a psychoactive substance, contributes to the emergence of addiction.

Is this disease curable? 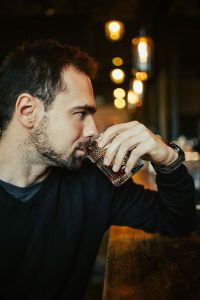 No, it is not curable. Like drug addiction, alcoholism is a lifelong diagnosis. Another thing is that a person can stop drinking alcohol himself or with doctors’ help and not drink until the end of his life. But even in this case, we are talking about long-term remission, but not about cure. The fact is that the very first glass of alcohol triggers the “dormant” mechanisms of an already formed disease with all the ensuing consequences. And this breakdown can happen at any moment.

What is hard-drinking, and what is its danger?

Drinking alcohol for several days in an ordinary person does not binge, although such abuse also brings serious harm to the body. In a patient with alcoholism, binge drinking begins with one or two glasses taken, after which the body switches to the already familiar alcohol exchange – and if alcohol is not taken, abstinence occurs. A person cannot stop, because – as we have already said – refusal from alcohol causes severe physical suffering.

Dangerous drinking binge metabolic disorders. People who are drinking binge either eat nothing or eat very little. They have enough energy due to alcohol. But proteins, fats, vitamins, microelements do not enter the body, and the longer the binge, the more severe the disturbances from all organs and systems.

Can a person get out of a binge on his own?

In theory, it can. But in practice, this is very, very rare. Self-recovery from binge drinking is associated with severe physical suffering, increased blood pressure, stress on the heart, and a high risk of complications such as myocardial infarction, cerebral stroke, gastric bleeding, epileptic seizures, and alcoholic delirium (“delirium tremens”).

How can a doctor help in such a situation

The doctor, with the help of various drugs that are administered, including intravenous drip, helps the patient to survive the period of recovery from a binge with practically no risk of complications. The so-called “shaking” is removed, blood pressure is reduced, sleep is restored, the body is nourished, the electrolyte balance is restored and, as a result, on the second or third day, the patient’s well-being is normalized without alcohol in the blood.

We want to bring users the complete information about alcohol addiction and modern treatment in a simple and understandable form, but at the same time, based on the principles of evidence-based medicine and reliable, verified sources that are available to Read More …

How To Get Out Of Alcohol Addiction?

Overcoming “alcohol addiction” is possible! Alcohol addiction is a phenomenon that has affected millions of people for many years around the world. The fact that as a substance, it is legal, makes it very difficult for the individual who abuses...

Alcoholism Can Never Be Cured, Although It Can Be Dealt With

Alcoholism ... Perhaps, no word is associated with so many various problems as with this. And rarely around what disease there are so many myths, stereotypes, rumors, how many around the addiction to alcohol. What is the biggest misconception about...

How Is It Effective And Quickly To Stop Drinking Alcohol?

Alcoholism is a physical and psychological dependence characterized by memory impairment, behavioural problems, pathologies of internal organs resulting from the systematic use of alcohol. Before you quit drinking on your own, you need to determine the reasons for the bad...

Signs And Symptoms Of Alcoholism

You often drink more alcohol than you would have liked, for longer than you intended, or despite having told yourself that you would not. You have given up on other activities because of alcohol. Spend less time on previously important...